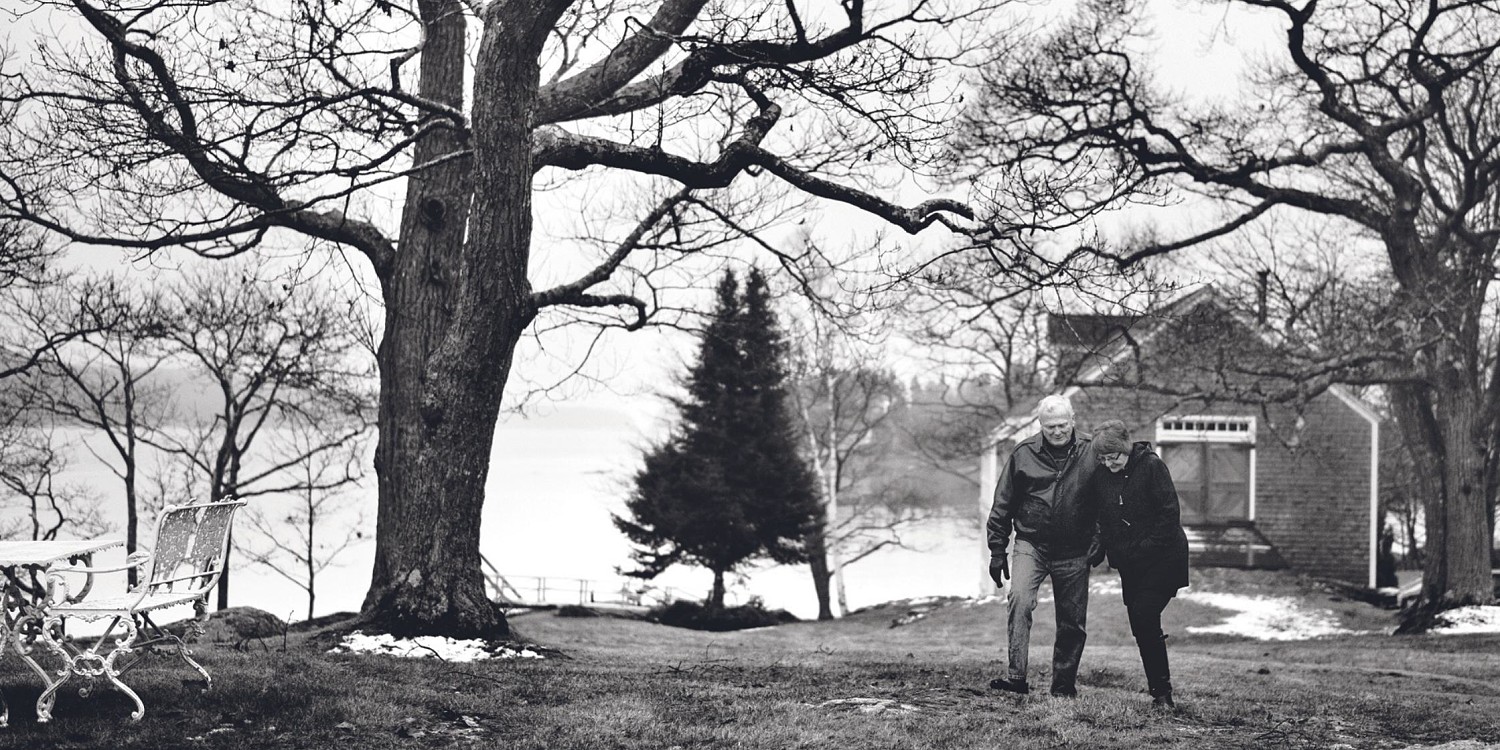 from humble beginnings to dignified design

Tom and Mary Moser didn’t fall in love with Maine the typical way. Before the arrival of their second son, they packed themselves, a tent, and a few provisions into their car for a long weekend. Being unfamiliar with the area and exhausted from a day of driving, they pulled over for the night and pitched their tent. Much to their chagrin, they awoke to a man’s voice saying they were blocking his driveway. Instead of being curt, the gracious man helped them move their tent aside and invited them to stay. They stayed for four days, and nearly thirty years later, they planted their roots on a spit of land not far from where they landed on that first trip to Maine. 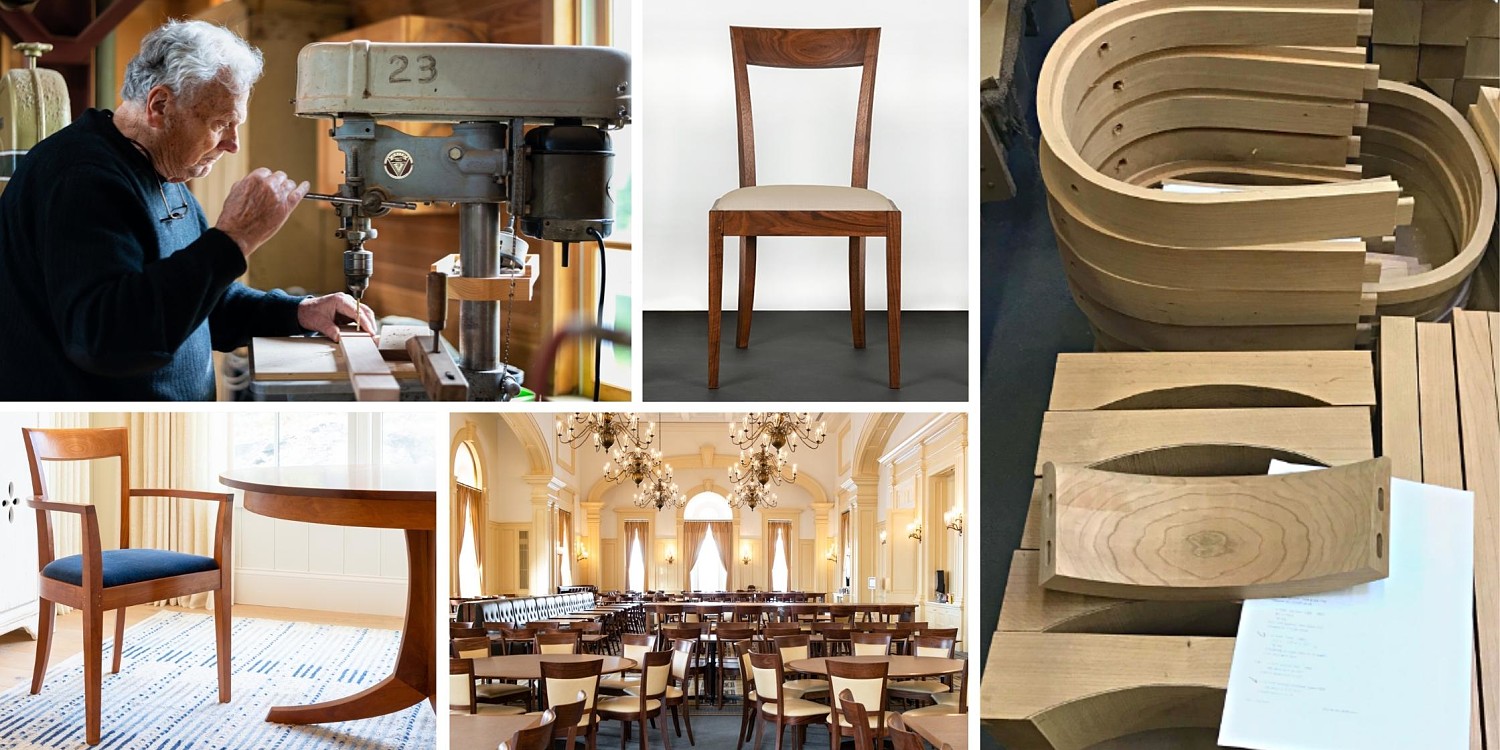 Around 1990, Tom strolled down the driveway to his Harpswell workshop and began working on a new chair design. He created a round chair with a quarter-round back, but he wasn’t happy with the initial result. After a bit more tinkering, the rounded seat became a U-shaped seat. “Eventually, I added a curve and tapered back leg,” Tom recalls. “And one day, I discovered that the round cafeteria chair I began making in my shop a few years before had morphed into this very pleasing piece.” The new design’s most magnificent appeal was an exuberant back carved from a solid piece of wood that intentionally displays the natural beauty of the wood, where no two are alike, revealing the mark of an heirloom. Eventually, the chair would incorporate an upholstered slip seat that rests directly in the chair’s frame and an often-requested upholstered back. 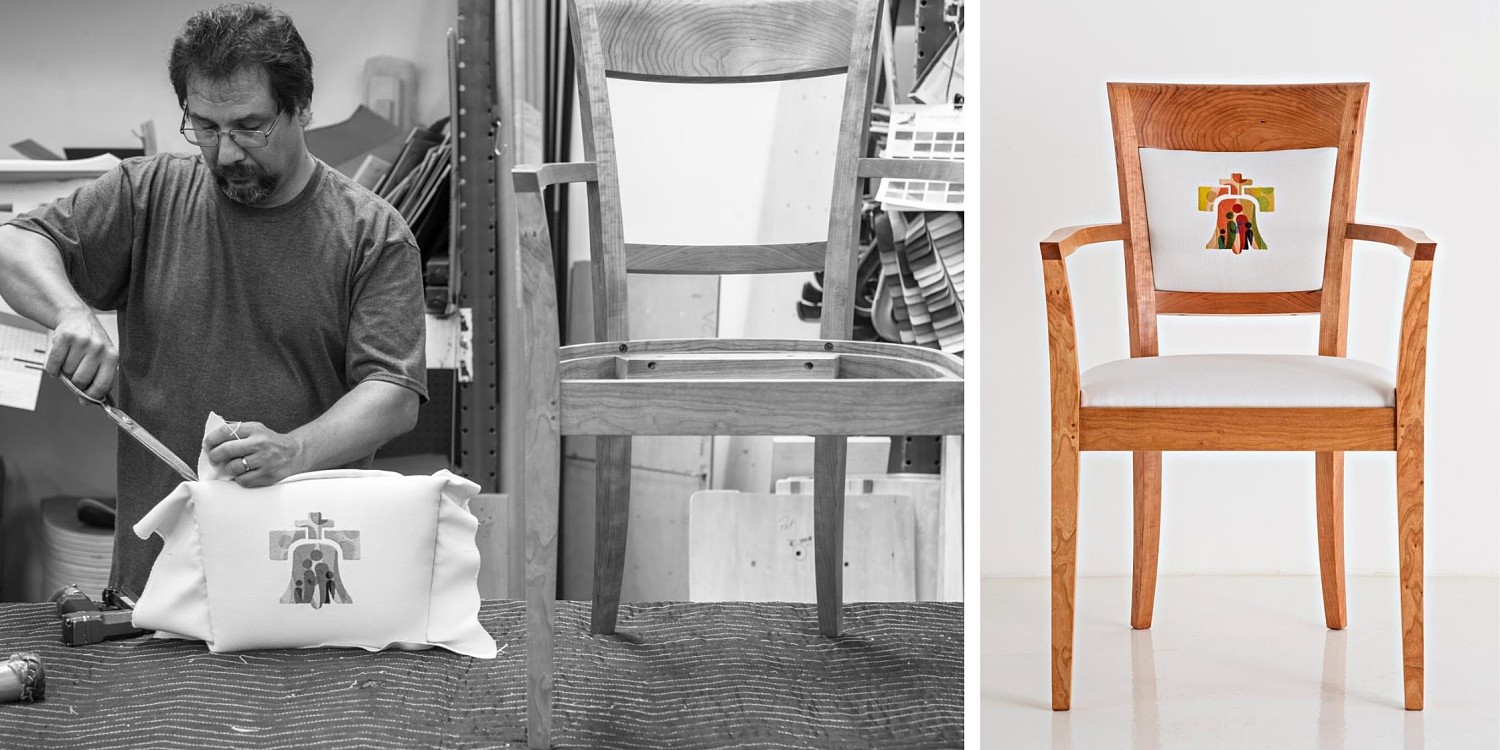 Aptly named after the location of his home studio, the Harpswell Chair was introduced in 1992 and became an instant classic. Its modest cafe chair design and refined details bring quiet distinction to any space. The versatility of the durable Harpswell Chair has made it a favored choice for countless family dining rooms, community colleges, and Ivy League libraries. In 2008, the Harpswell Arm Chair would be selected as Papal seating and chosen as the signature piece to grace the George W. Bush Presidential Center in 2013- where during the dedication, five living presidents would be comfortably seated. 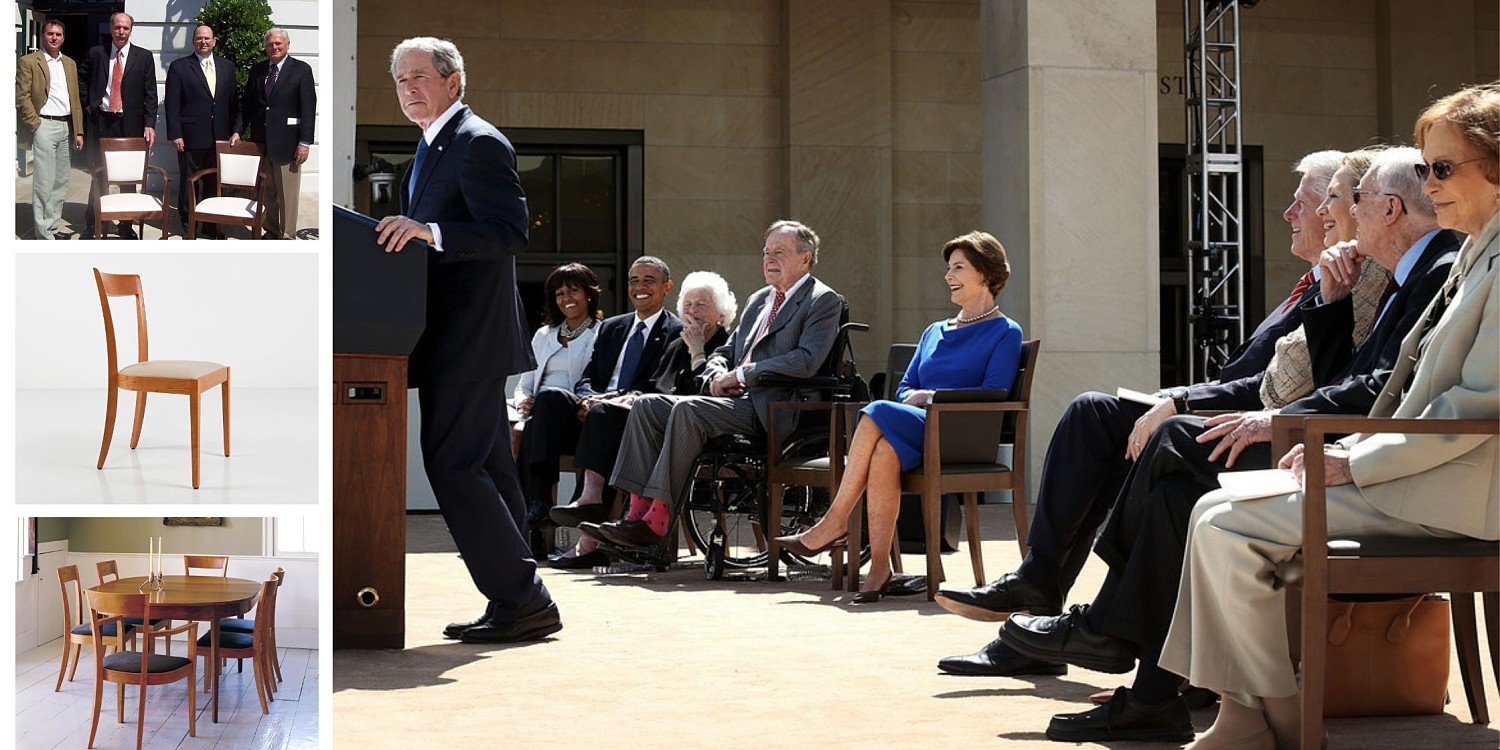 Incorporated in 1758, the town of Harpswell boasts the longest coastline of any town in Maine. This rugged coastline, purchased with a pound of tobacco and a gallon of rum, has cultivated generations of self-sufficient families who worked with their hands; fishers, farmers, shipwrights, and now, a furniture maker. From the humble beginnings of a simple cafe chair to a dignified design saught after by Popes and Presidents, the Harpswell Chair is a natural fit for every home and any occasion. The expressed growth rings found in the crest celebrate the weathered-tested years of a strong tree and embody the spirit of a community nestled along this section of granite coastline known as Harpswell.

You may also enjoy reading… 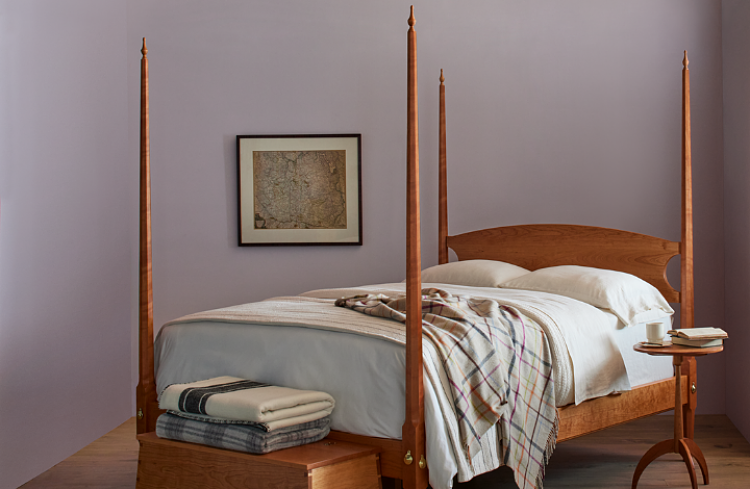 It’s hard to imagine our Pencil Post bed folding down the size of a large suitcase. But the solid wood design was inspired by the early modular English Field Bed, built to support a canvas mattress and canopy of mesh netting to keep out mosquitos. However, if we dig even further into antiquity, we find the roots of our four-poster bed go even deeper. 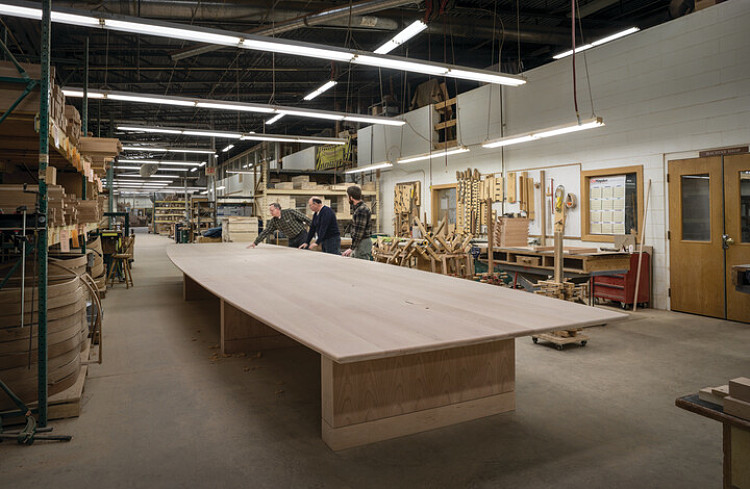 The most significant projects are born through collaboration and a willingness to push the limits. This is how we have crafted tables that span more than thirty-six feet long. Read how we have blended the art of handcrafted furniture with modern technology to create these one-of-a-kind tables. 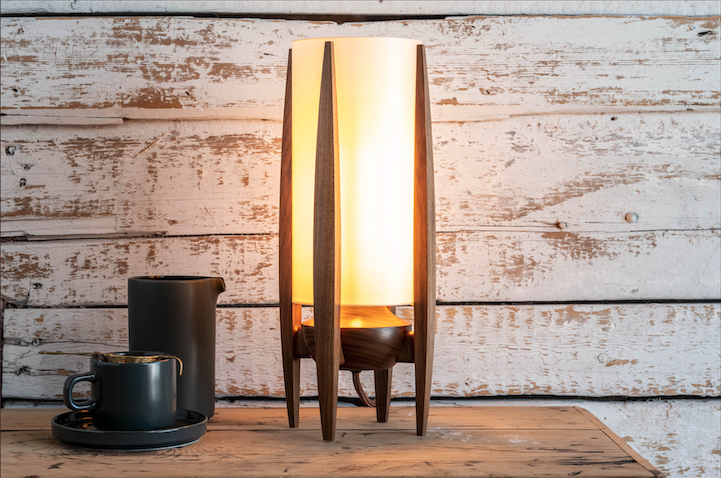