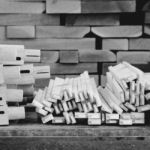 What is your favorite piece of Thos. Moser furniture?

The Continuous Arm Chair, I’ve spent so many years working on it and it’s still my favorite piece to make.

When George came to Thos. Moser, he was still a student in high school. Early on he knew that hand crafting was something he wanted to do. In 2002, Thos. Moser partnered with the state of Maine to create one of the first apprenticeship programs in the state for cabinet making. The program required vigorous work at a local community college and at the Moser workshop. George was one of the first students to graduate from the program and years later, it is still one of his proudest accomplishments.

George began his career at Thos. Moser crafting chair pieces; today he is our Chair and Safety Coordinator. He finds that the Sofia Three-Place Sofa is one of the toughest to make because of its fine curves and the numerous joints that must be perfectly aligned, “it really takes finessing to get it just right,” he says. Throughout his time here he has had the opportunity to gain experience crafting tables, beds and cases in addition to chairs, “I haven’t mastered them all yet, but I’ve had a lot of great mentors to follow along the way.”

His passion for working with his hands has been clear from the start and permeates into his personal life as well. He built his own home for himself and his family and when he is not at work, he enjoys picking away at projects around the house.

Inspiration in Your Inbox

Sign up for emails to enter a chance to win a $1,000 GIFT CERTIFICATE